We all have appeared for interview for jobs. But have you ever lied? Most of us have lied at least once in all the interviews we have appeared. But we are not caught, right? It is because many a times, humans are not able to make out the difference between a lie and truth. This is dependent on an individual’s experience. If a “bot” driven by Artificial Intelligence conducts the similar interview, all the facial expressions are captured and analyzed and a lie is easily identified. So, which is better, AI interview or Human interview? Let’s analyze this and see how it works.

For ages we are so used to of human interview that it is beyond imagination that we will be interviewed by a “bot” driven by AI. AI interview comes with many advantages not only in terms of facial expression analysis but on overall analysis. The questions are pre-decided. Very convenient for the candidates, as they can appear for an interview anytime per their schedule. They can appear for an interview on any device too. This entire proposition is comfortable for the employer also, as they do not have to run after the candidate’s time and availability. Once, the interview is conducted, the facial expressions, voice tone, soft skills, response time and responses are analyzed by algorithms driven by Artificial Intelligence, machine learning and Natural Language Processing. This gives a holistic view of a candidate and unbiased sentimental analysis along with the score. Sounds interesting, isn’t it? Definitely interesting and efficient. Now let’s take a look at how Human Interviews work.

A very popular way to interview is human or physical interview. A recruiter calls the candidate and fixes up time for the interview and it is conducted based on each other’s convenience. This is the ideal scenario. However, with so much of human dependency, it is possible that either party might not be able to make to the scheduled time. This means repetition of the entire process and another time is fixed. Since, first round of interview is most of the time on phone, hence it is not possible for the recruiter to see the facial expressions of the candidate. So, if a candidate is a smooth talker, he or she will easily get away with the lie as well, and move on to the second round of interview. Also, as this interview is dependent on personal judgement, which could be biased also for any reason, we may not get the clear picture of what went right or what went wrong. In this event, it is a possibility that a deserving candidate can get lost and a non-deserving candidate can go ahead for the next round. There is a positive aspect to this interview is that this provides a humane touch experience to the candidate.

Which ones seems better? Definitely AI wins over, due to its unbiased analysis and convenience. What is your take on this? At Workonic, we leverage technology driven by AI to make the experience flawless for both the employer and a candidate. Also, we will like to hear from you and if you want to learn more on AI driven interviews, please get in touch with us or write to us at info@workonic.com. We will be happy to answer all your queries. 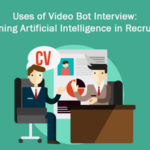